The 44 volunteers of Mapleton Fire/Rescue commit their Tuesday evenings and Saturday mornings to professional development, training, and fleet management in order to respond effectively to their calls. They will be receiving four new tablets for their trucks.

“Tablets are a great resource in this day and age,” they wrote in their application. “They are used to locate an emergency easily, to access maps for our water sources, and even more importantly to know who is responding.” These tablets will allow volunteers to inform their colleagues who is responding to the emergency and they can also be used to take pictures of the scene.

I called Chief Rick Richardson who told me these Samsung tablets will be a great help to the department and they have already been practicing on one. He has family in London, just as I do. 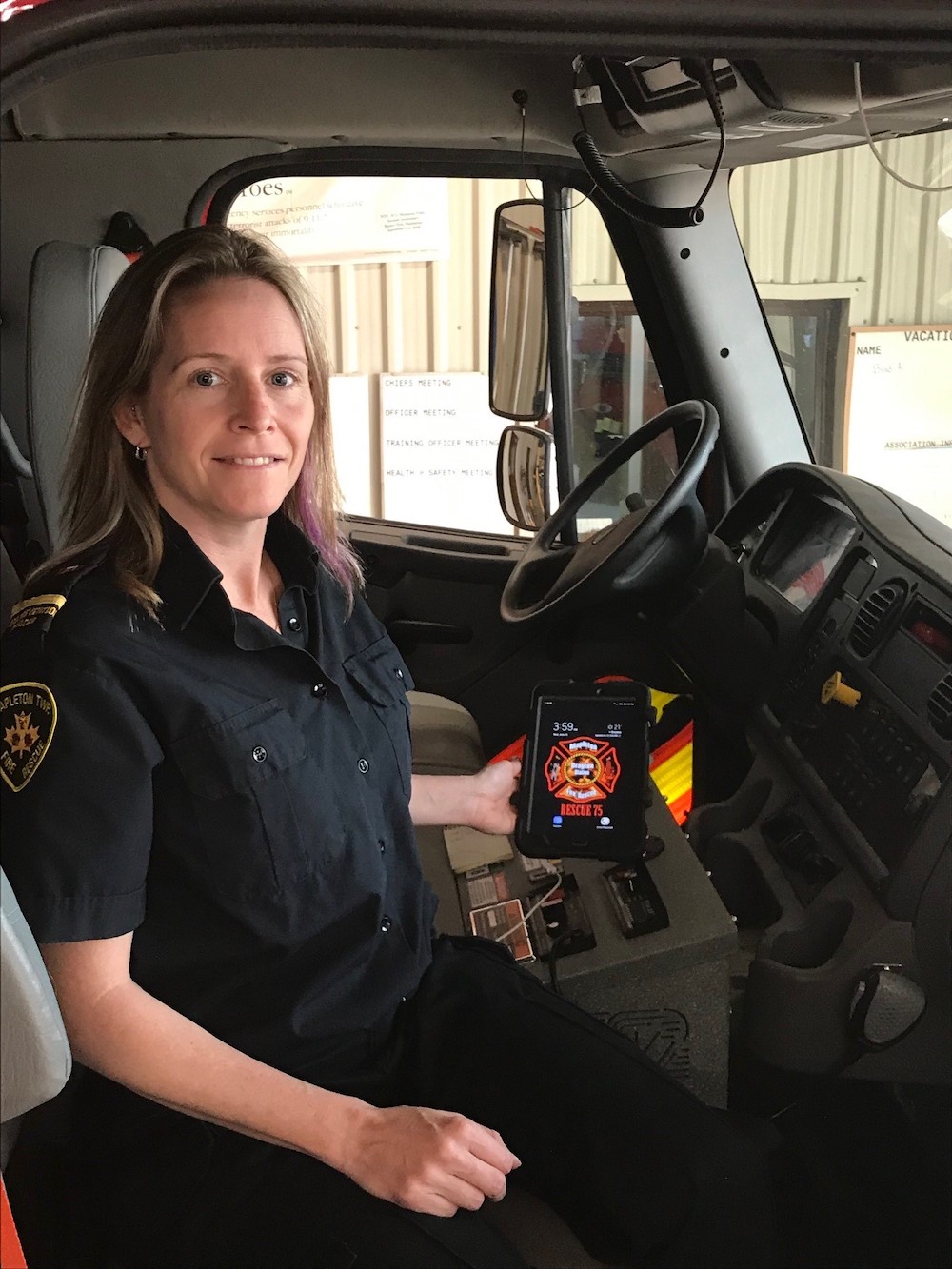 A note of appreciation from Mapleton Fire/Rescue:

“Pictured is Amanda Cooper, Mapleton Fire/Rescue’s Fire Prevention Officer, displaying their newly installed tablets. These tablets were installed in each of Mapleton’s responding vehicles with funds provided from the Jenny Jones Foundation through the Ontario Association of Fire Chiefs.

The main function of these tablet’s is to advise the Officer, in the passenger seat, of the number of volunteers responding to each incident. Volunteer firefighters initiate this notice by responding to an application displayed on their cell phone. The Officer can then make educated decisions depending on the numbers shown, if more resources will need to be requested.

Secondly, the tablet displays a mapping software that directs the volunteers to the location of a call, with detours and construction noted on the route. This will also display water sources such as fire hydrants and rural water supplies near the event if needed.

Thirdly, the camera on the tablet will allow the first Officer on scene to take initial pictures of the scene and further photos as the incident proceeds.

Lastly, an App downloaded to the tablet will help firefighters determine which points of a vehicle are advantageous and safer to extricate persons trapped at an automobile collision.

In the future Mapleton Fire/Rescue hopes to have a tactical worksheet put on the tablets that will assist the Incident Commander with a checklist of functions to perform and benchmarks to achieve depending on the type of event happening. They also hope to start using the tablets for electronic submissions for truck and equipment checks.

Mapleton Fire/Rescue is very appreciative of the funds provided by the Jenny Jones Foundation to purchase these tablets and is excited to start using them.”